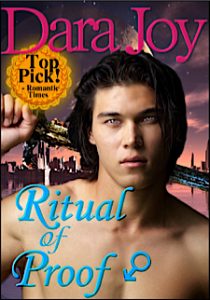 In an alternate Regency world where women call the shots, can one man hope to change the Ritual of Proof.

Dara Joy makes her hardcover debut with an extraordinary new novel, one that reexamines the very nature of love and tests the boundaries of romantic fiction. Countless readers have already flocked to her unique, page-turning tales, making Joy a nationally bestselling author. Now, this spectacular writer reaches for even greater heights in “Ritual of Proof.

Joy gives us a different look at ourselves, our society, and our expectations in relationships. “Ritual of Proof creates a vivid new world; it’s a book you will remember long after you’ve reached its riveting conclusion. This is a dazzling tale of sensual intrigue and power, set in a world where women have all the control…and desirable men fetch staggering bed prices. An elite upper class dictates society’s mores, while the vices of its rich, influential She-Lords are politely overlooked.

Set against a sweeping canvas of political conspiracies, the Marquelle Green Tamryn decides to marry…making an alliance with an influential family and consolidating her position among her peers. So she fastens a defiant Jorlan Reynard to her house and to her bed. And so the Ritual of Proof begins…for both of them.

But there are forces conspiring against Green, especially from Claudine D’anbere, her sworn enemy — a woman who would do anything to destroy her. Soon, Green must summon all of her considerable influence to fight, and in doing so, she does what society deems close to unthinkable — and turns to Jorlan for help. She is both surprised and overwhelmed by his masterful abilities as both ally and husband, but when the validity of their union is called into question and a series ofdisasters befalls them, they realize that there is more than their place in society in danger…it’s their very lives that are threatened.